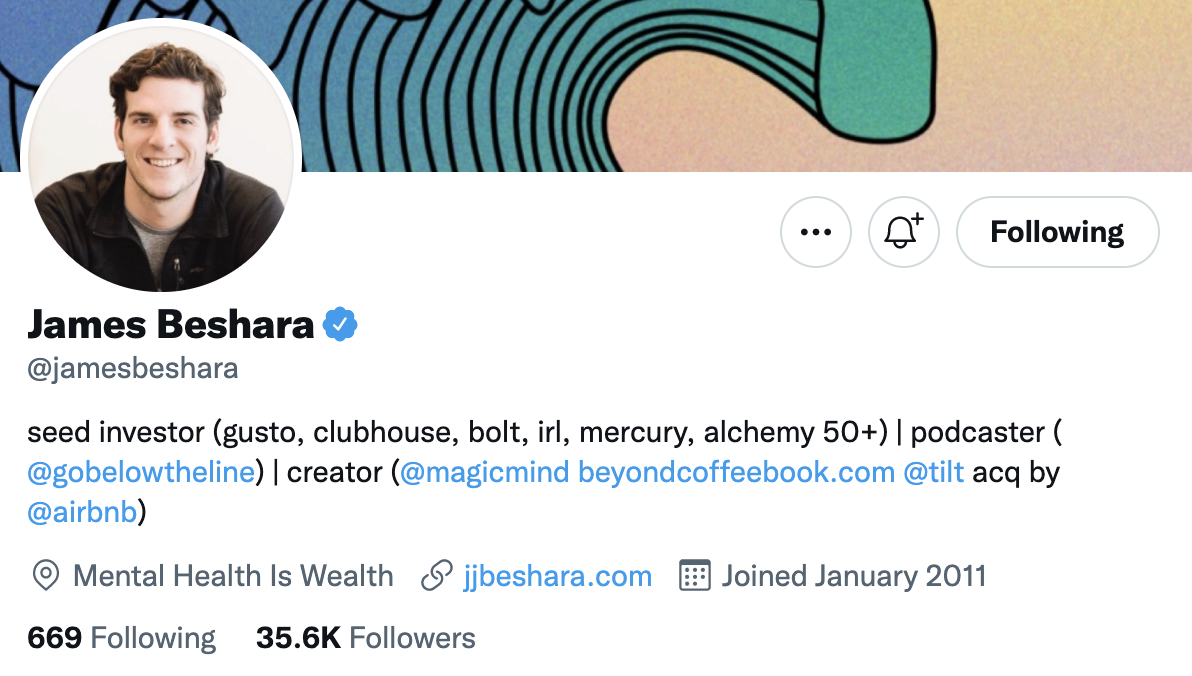 James Beshara is a repeat founder, angel investor, podcaster, and prolific writer. His latest venture, Magic Mind, offers a DTC energy shot fueling flow-states and productivity around the world, while his podcast, Below the Line, uncovers all aspects of the founder journey with over 100K listeners.

What’s perhaps most impressive is his angel portfolio, which spans checks into high-growth companies like Mercury, Haus, Gusto, Clubhouse, Bolt, ThirdLove, and Recess. We sat down with James to learn from his diverse experiences, including discussing why infrastructure is the best wave to ride as an investor, what trends are actively shifting in the eComm landscape, and to discuss his early hurdles at Magic Mind.

In terms of advice he’s learned the hard way and would pass on to a pre-launch DTC startup, James recommends having a thorough understanding, from day one, of the cash flow and inventory needs, as well as broader operational and accounting structures, of your business.

As James describes it, he entered entrepreneurship with a software-first mindset and spent the first 9 months of running his DTC brand virtually in the dark on the deeper financial and inventory cash flow topics before he brought on a strong financial consultant and advisor.

In retrospect, he recalls that his early lack of knowledge, and thinking the accounting of a physical goods business would be “pretty straightforward”was a risky and expensive move that could’ve easily gone south.

Once you are over a few thousand dollars of sales, back-of-the-envelope math no longer works. You need a detailed understanding of your inventory costs, labor costs, shipping, returns, acquisition channels, etc. along with both fluctuations and optimizations of each to truly understand what the business can look like if you’re fortunate enough to grow it rapidly.

Finding a great DTC financial consultant, often called an FP&A consultant (notan accountant), was invaluable to move from a flashlight to a floodlight on the cash flow of the business.

He also adds that many founders get caught between wanting to launch their MVP as quickly as possible and dragging their feet until they’ve completely fulfilled their vision for the product.

It’s a fine balance, and most founders err on the side of caution.

But as James puts it, there are multiple launches in any company’s lifecycle. For instance, both Airbnb — which acquired his last startup — and Magic Mind had three separate launches. With each iteration, both concepts became more fleshed out and radically improved their offerings. In his mind, you can (and should) launch multiple times, with the first being for friends and family and as early as possible.

Finally, James drives home the point that it’s critical to make peace with the fact that everything in the startup world takes twice as long and is three times as expensive as you’d expect.

Growth Advice: The Solution is the Product

To boost DTC conversion of one-time users into subscribers, James maintains one rule of thumb: the answer begins and ends with the inherent quality of your product.

If there’s exceptional product-market fit and the product quality itself is undeniable, a strong percentage of customers should be able to sample it just once and be convinced that it’s worth a repeat purchase. “The first or second version doesn’t need to hit a 60% repeat purchase rate, but when you are ready to go all in, it does,” James says of most DTC consumer products.

The key is establishing that positive first touchpoint, and then following up with the opportunity to subscribe with a seamless signup flow. In a heavily inundated market, it’s too difficult and too expensive to peddle your product to a customer, who’s already overwhelmed by their options, if they don’t truly love it. Rather, it’s far more efficient to get back to product fundamentals.

“To put it bluntly, getting someone to subscribe to a high-quality product requires a fraction of the effort it takes to sell an average or mediocre product over and over.”

James has watched the commerce ecosystem explode over the last decade, with one notable shift being the evolution of the eComm tooling stack. For instance, Magic Mind has an annual revenue run rate of north of $4 million yet employs only one full-time employee. This is made possible by the 30+ tools, services, and partners like Tydo and Skio that James leverages.

He adds that the eComm stack is wildly more sophisticated and scalable when compared to the problem solving of ten years ago, which would’ve entailed throwing more and more workers at an issue to come up with a far less elegant solution. Put simply, more capital for less return.

On the flip side, while the eComm ecosystem has seen rapid improvements in products and tools within the last five years, James notes that subscriptions payment architecture has stagnated. Virtually none of the dominant tools on the market have been updated in half a decade.

“Despite a decade of progress in eComm, there are so many issues to be resolved on the subscription side of things. Luckily, Skio is tackling this space head-on.”

Placing Bets in the Enablement Ecosystem

On the DTC investment front, James is particularly impressed by the new normal of lower financial barriers to entry. In his words, you need far less capital than ever before (think under ten grand) to build a great initial product and launch it into the market.

Angel investors are also quickly becoming larger and larger players in fundraising, as opposed to old school venture funds which are more wary of DTC than they were about a decade back.

Regarding niches he’s tracking from an angel lens, James continues to cut checks around the future of the eComm enablement landscape, particularly because investors can play a more foundational role in the massive wave unfolding, rather than simply betting on brands alone.

Charting a singular path to your customer as a lone DTC founder is incredibly difficult today, primarily due to the fact that so much of the infrastructure simply doesn’t exist yet. As the solutions to these growth bottlenecks are unlocked, James is prepared to climb aboard.

“Investing has been a 10-year journey for me, with each investment bringing a fresh opportunity to refine the art of it. All of them have either put a product into the world that I’m extremely proud of or helped me learn that much more for the next idea or founder to encourage further.”