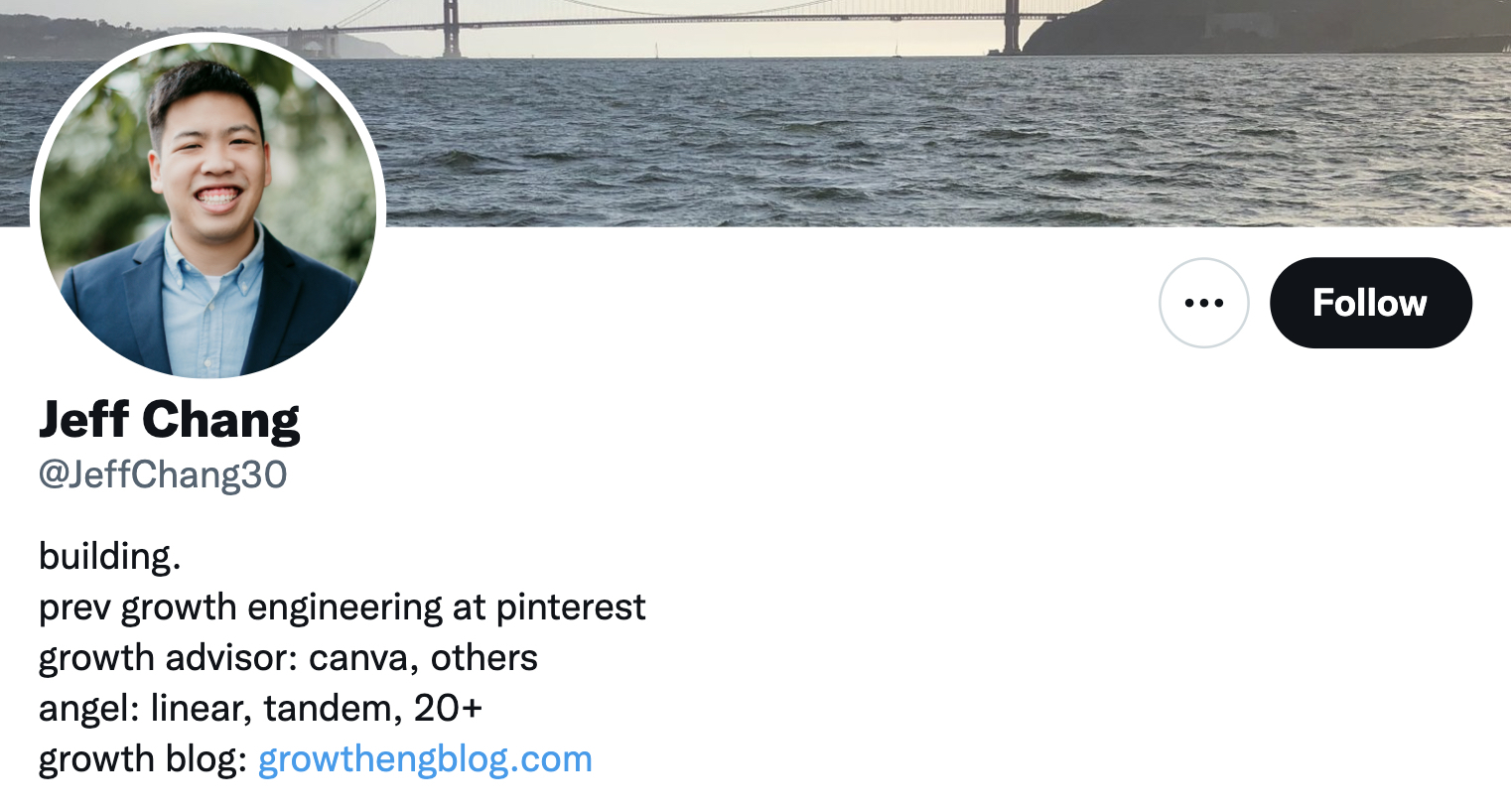 Jeff Chang has been a growth advisor to a range of category-defining startups like Canva, Lyft, and Upwork. He’s also a prolific angel, with investments in over 20 seed-stage startups.

Previously, Jeff led various growth engineering teams at Pinterest for half a decade, scaling various teams from zero to one and the brand’s MAU to 400M+. Jeff sat down with the team at Skio to run through customer churn troubleshooting, data-driven segmentation strategies, balancing paid versus organic playbooks, and acquisition blueprint breakdowns.

“With most questions or challenges at a startup, you just need to collect as much data as possible. Once you’re armed with that data, you can make moves.”

After tracking retention data across multiple cohorts, you might still be seeing user dropoff and churn for a number of reasons. Jeff run through a few examples:

With so many variable events that could be driving dropoff, Jeff recommends two styles of debugging to get to the source of the churn: bottoms-up and data-driven.

In Jeff’s experience, massive survey blasts requesting feedback are uneventful and tend to be a waste of everybody’s time. Instead, try to target and reach out to specific users or usage cases that have resulted in churn. Even a simple async email response can be highly informative.

For instance, if a user responds by saying they had no need for the product after one use, you’ve already figured out a cause for dropoff, albeit in isolation. Or if another user says they couldn’t figure out how to use the product, you can dive deeper into the issue to collect as much qualitative data as possible on what’s not working or causing confusion for your users.

To suss out the source of churn by leveraging data analysis, Jeff recommends that founders start by figuring out what percentage of first-time users are sticking around, and then digging into what the commonalities are among those retained customers.

In his words, if you can piece together a profile of one type of customer that simply loves your product, you should be doubling down and honing in on that specific type of buyer.

Otherwise, segmentation is essential for drilling down on retention data. Take a look at when exactly it is that users drop off and don’t return. If they sign up but never log back in, it’s likely an issue with onboarding, or perhaps your value proposition is inadequate and needs improvement.

You can also take a look at segments by breaking down your consumer base into personas, i.e. small vs. midsize vs. large companies. According to Jeff, working your way through your user segments is crucial to deciding which are stickiest and thus most likely to keep coming back.

“Most founders like to focus on why customers stay rather than why they churn. However, you really need both sets of data to refine who your ideal user is.”

It’s a familiar concept, and Jeff swears by it: Every brand is different, and you should take your acquisition cues from heavy hitters and growing names in your sector.

For instance, companies in certain DTC verticals invest heavily in paid acquisition because it traditionally comprises a large portion of their growth, while often remaining quite scalable. Meanwhile, for sectors like B2B and SaaS, paid GTM strategies just don’t convert as well. As a result, he recommends leaning into direct sales and organic content marketing blueprints.

More broadly, Jeff drives home the points that paid is a prominent investment of capital and time, and attempting to take anything but an all-in approach will likely be a waste of resources. Instead, he advises zeroing in on your highest performing GTM channel as that route will likely end up contributing 50% or more of your total acquisition across both organic and paid.

Doubling down on this point, Jeff adds that almost every great founder he works with has their acquisition breakdown memorized because it essentially drives their entire growth strategy.

For example, if 60% of sales come from a single channel, it’s time to keep doubling down investment in that channel to see where it maxes out. Meanwhile, if you’re pouring resources into a channel that contributes 5% or less to sales, it’s time to reallocate and focus elsewhere.

“When it comes to acquisition, there’s not really a middle ground. For example, if content is performing, I’d say double down and go all-in on that channel.”

To round out the conversation, we asked Jeff what his go-to strategies are for structuring paid versus organic acquisition strategies. Spoiler: There’s not a one-size-fits-all approach.

Jeff typically recommends that founders of consumer brands navigate the paid acquisition flywheel for themselves first, rather than outsourcing to an agency or freelancer.

In terms of comparable ad costs, agencies are expensive with no guarantee of success, while zero capital is wasted if a founder steers the process themselves. Put simply, a founder needs to deeply understand their customers and consistently sell to them, insights that often come fastest through repetition and iteration across paid marketing channels.

In addition, from an investor’s lens, a founder’s core ability to sell their product signals a high degree of competency needed to scale their growth function over time.

When it comes to organic tactics like social media and SEO, Jeff points out that a channel which works phenomenally well for one brand is never guaranteed to give the same results to another.

As it relates to content specifically, Jeff notes that to succeed in original writing you need to find a niche where your content doesn’t already exist. Churning out content that competitors have already written about will only lead to your brand getting quickly drowned out in the market.

“With both paid and organic, there’s no guaranteed channel that will consistently convert. So, you need to learn the process for yourself and get your hands dirty.”