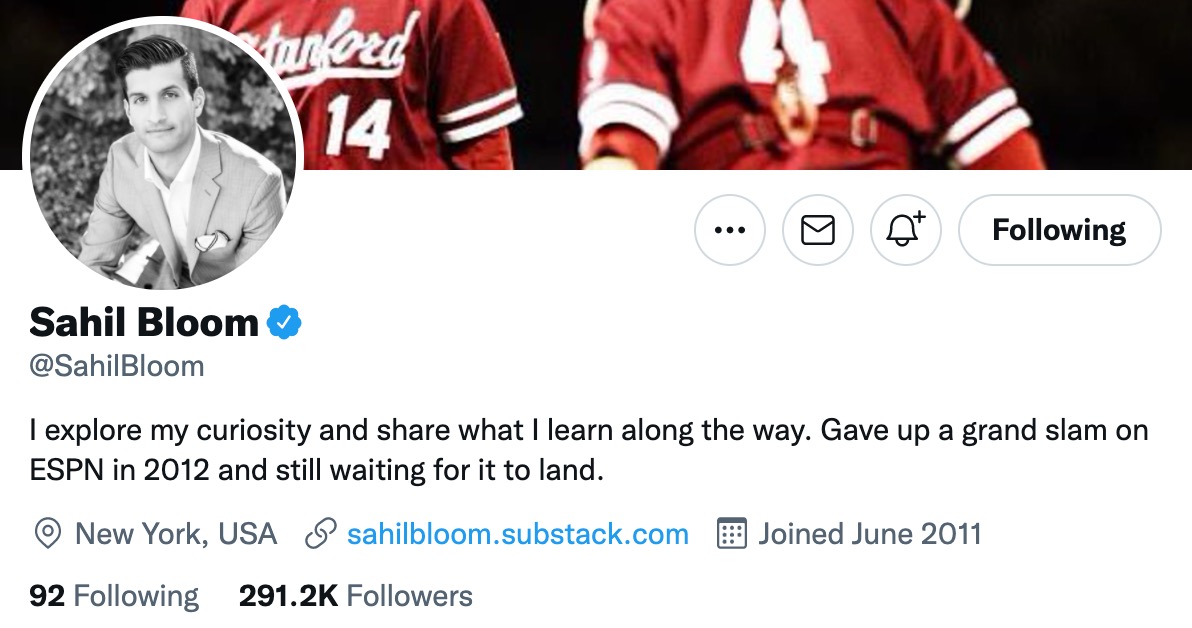 Sahil Bloom is an advisor at Altamont Capital Partners, a serial angel investor in over 30 tech startups, and a board member for several consumer brands in his portfolio. His angel portfolio spans category-defining companies like Mercury, Alpaca, Pallet, Metafy, and UserGems.

But, you’re more likely to recognize Sahil from Twitter. With 280K+ followers, he writes distilled educational threads as well as popular newsletter that demystifies finance and economics.

We sat down with Sahil to get a piece of that expertise, diving deep on constructing zero-to-one acquisition funnels and designing growth tactics that compound with each repetition.

“To put it as bluntly as I can, you can’t fake content based on what you think the market wants from you. Authenticity is at the core of any successful strategy.”

The first step to building your audience is defining your voice. Maintaining consistency in your brand’s editorial style, and thus broader identity, is a critical part of breeding genuine loyalty.

To find your brand voice, Sahil emphasizes the role of authenticity in driving results, rather than a false persona you assume the market wants to see. In this vein, founder-market fit is crucial because the source of your company voice should resonate within your market niche and for your vertical’s users. When this occurs, take it as a sign that you’re building in the right space.

In terms of defining channels to amplify your voice, Sahil comes back to written content. A basic Twitter account and newsletter can be high leverage tools for early acquisition if you can stand out against the landscape due to the fundamental quality of your ideas, not their flashiness.

“The sign of a great brand personality is when it doesn’t feel like a brand speaking to you at all. It feels like there’s a person behind it: someone who relates to you.”

A common refrain for founders might be that they can’t find time to build an audience because they’re busy perfecting the product or assembling a team. Sahil insists that one doesn’t have to come before the other. Rather, they should be developed in tandem.

Sahil points out that one way to scale an audience while your company is still young is to hone in on precisely that fact. Put simply, share insights on what you’re learning as you build it.

Building in public is a powerful amplification driver, or doing and learning interesting things then sharing them for your audience’s benefit. He notes that you can attract an audience just by reporting what you’re learning in real-time. Though, of course, the reality is that someone who lives and breathes their product likely won’t have time to share well-crafted tweets all day.

To this end, Sahil emphasizes the importance of designing tight-knit networks, or groups of people who support each other by boosting one another’s content in their respective niches and pockets of the market. As a result, each node in the network can scale their audience together.

“A great network of creators doesn’t just drive retweets. Rather, it forms tight connections between nodes in a collective, in turn shifting attention back and forth to each other’s content. This was massively important for my own growth.”

To Sahil, Twitter will always serve as the ideal top-of-funnel channel because it serves as your company’s largest, easiest discovery mechanism. In his words, you’ll be able to capture the most people you would never have encountered in traditional social acquisition channels.

You should then drive Twitter followers through to an email base. Emails can be collected through a landing page, organic SEO, or any other entry point for this stage of the funnel. You’re now developing an owned audience, but without the typically associated platform risk.

Eventually, that email base responds to direct calls to action, whether that’s purchasing, generating organic noise about your brand, improving event attendance, or otherwise. In terms of common mistakes to avoid while building out your funnel, Sahil advises that teams should be wary of an ineffective platform push, or failing to drive people from one platform to another.

For instance, turning Twitter followers into email subscribers requires more than tweeting a link to your newsletter. After all, Twitter’s algorithm works to keep users on the platform, so linking to an off-platform site will mean even less eyes on your post.

Instead, Sahil recommends embedding an off-platform link deeper within a piece of content that could go viral, since that’ll guarantee far more views than an algorithm-unfriendly tweet.

“To unlock channels like Twitter, you need to deeply understand how the platform works at its most intimate level, rather than just blasting content on repeat.”

The Unbundling of Acquisition

As someone with access to various parts of the ecosystem — audience development, creation, and investment — Sahil shares his unique view on what trends are emerging in full force.

Founders and investors alike are realizing there are novel ways to scale a business to new users that don’t involve spending money on paid ads or other traditional customer acquisition efforts. In fact, the practice of customer acquisition as a whole has essentially been deconstructed.

According to Sahil, creative audience development tactics enable access to new ecosystems, verticals, and user bases for effectively zero dollars. Or, with the rapid ascent of party rounds, entirely untapped networks can be now accessed in the form of minor dilution to your cap table.

“The speed at which acquisition is getting completely unbundled is one of the most fascinating trends. It’s happening in real time, right before our eyes.”

Given his extensive record as an angel investor, we asked Sahil how he evaluates early-stage startups and founders. In his words, while he’s enough of a data nerd to understand what good metrics look like for a young company, he hones his focus on the people behind the numbers.

After all, early businesses will always run into growing pains, so the question is whether the founding team is capable of working through them. That degree of grit — the ability to be resilient and succeed regardless of past failure — is the trait that draws Sahil to a founder.

“I tend to focus more on people because I have a good eye for people. What I’m looking for is grit, and that’s hard to teach. You either have it or you don’t.”