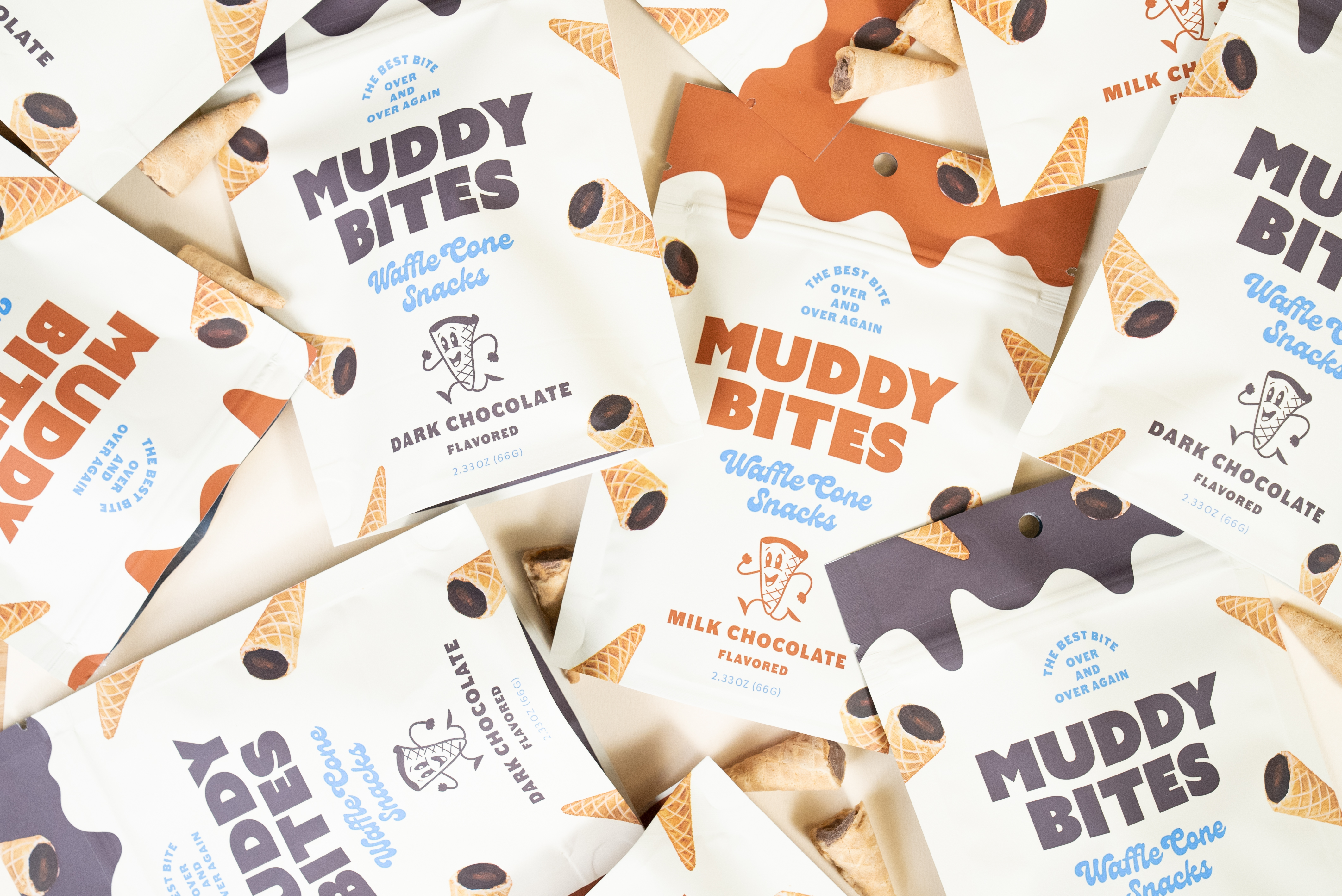 Muddy Bites brings everyone’s favorite part of a sundae cone, the bottom part filled with chocolate wrapped in a waffle cone blanket, to their snack drawers each month. Since 2018, the DTC brand has grown over 1,000% YoY and fulfilled over 100,000+ online orders. While also launching on Amazon not too long ago and topping some best-seller lists along the way.

Contracts are in the works with staple distributors & retailers, so expect to see the brand in thousands of brick-and-mortar retail stores by the end of 2022 and into 2023. Quite the growth trajectory, to say the least.

“We’ve seen extremely rapid growth over the past year. Skio allows us to take that even further by upgrading our entire subscription experience.”

Prior to Skio, the Muddy Bites team managed subscriptions on Recharge.

At the time, the brand ran on a headless Webflow frontend rather than Shopify, which quickly set in motion an endless cycle of problems. Due to Recharge’s lack of compatibility with headless, customers flooded Jarod’s support line with constant issues, ranging from an inability to log onto their individual subscriber portals to frustration managing personalized order settings.

Even after Muddy Bites eventually migrated to Shopify, Recharge soon presented a new issue: serious security flaws for the brand’s paying subscribers. Buyers frequently complained about finding other customers’ information in their account portals when they logged in. According to Jarod, he’d heard this issue crop up from time to time with other brands as well.

However, this data breach seemed to be happening for every single one of their customers. As a result, this violated buyers’ baseline expectancy of security from Muddy Bites and drove notable customer churn when subscribers dropped their plans because they felt their data wasn’t safe.

Further compounding this issue was the fact that not only customers struggled to navigate the clunky Recharge interface, Jarod’s own support team also faced admin portal inaccessibility.

According to Jarod, it would take his team at least 10 clicks to locate a customer’s entry, then another few clicks to try and figure out how to work the system and solve their ticket complaint. From a high level, the Recharge platform was unfriendly and unintuitive for both subscribers and the Muddy Bites support team that needed to be properly equipped to help their customers.

“All in all, it was a complete mess and headache to work with Recharge.”

After deciding it was time to end the subscription nightmare brought on by Recharge, the Muddy Bites team shopped around for a replacement, but to no avail. Smartrr was another option in the ecosystem that, according to Jarod, had zero availability for onboarding for at least two months down the line. Meanwhile, Bold Subscriptions had a similarly clunky feel to Recharge.

Jarod soon found Skio on Twitter, browsed their website, and thought, in his words, “Damn, this is super clean.” After a quick demo, he was sold on the idea that from both the buyer and admin perspective, Skio was the solution Muddy Bites needed to help scale its subscription engine.

Regarding his onboarding process, Jarod recounts that the migration from Recharge to Skio took less than five minutes: a clean, seamless process that required no work or worries on his end. Jarod adds that he went to bed, knowing the migration would take place overnight, and woke up at 7 AM the next morning with all of his subscribers’ data stored securely within Skio.

“I couldn’t believe how seamless it was. I went to bed and then boom, everything was perfectly set up on Skio when I woke up the next day.”

Jarod outlined just a few of the ways Skio streamlined workflows for the entire Muddy Bites team, as well as their thousands of hungry subscribers.

The prior security mishaps presented by Recharge simply no longer applied, due to the fact that Skio doesn’t store passwords. Instead, subscribers enter their phone number or email and receive a passwordless login code that expires within minutes.

With Skio, customers log in and are greeted by a clean dashboard which displays their recent orders, upcoming billing and shipment dates, and easy options to cancel or edit any aspect of their subscription order, be it delivery date, payment details, or cart updates.

This visually intuitive, accessible UI also assured Jarod that his team members would no longer need to play a guessing game to understand the core interface necessary to do their jobs.

In the past, support team members wasted time and clicks in an ill-designed user flow when trying to just get into Recharge from Shopify and make the selections necessary to answer a customer’s ticket. As Jarod described it, simply arriving at the Recharge app felt like a drag.

And once you were in, loading a customer’s entry took 30 seconds, a sign of a woefully outdated system. Now, since Skio is Shopify-native, one button can take you from Shopify to the Skio dashboard, where its layout streamlines the process of selecting whatever function you need, whether it's canceling a customer’s upcoming order or adjusting payment methods.

In just a few clicks, the customer’s been taken care of. According to Jarod, that’s the priority.

In addition to the monthly price for access to the actual platform, Recharge charged $250 each month for basic client support. Otherwise, the Muddy Bites team was forced to wait anywhere from 48 to 72 hours for responses to the email requests they sent, seeking help on customer complaints they weren’t given the system permissions to solve.

After jumping ship to Skio, Jarod and the team could expect replies within 15 minutes.

“The difference between Skio and Recharge was night and day in terms of support, reliability, security, and just really damn good interface design.”